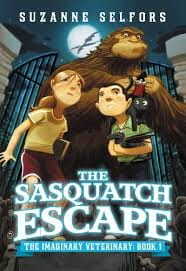 Do you like the idea of dragons and griffons and unicorns living among us?  Then you should read the Imaginary Veterinary series by Suzanne Selfors.  This six-book series begins with The Sasquatch Escape.  Ben Silverstein has been sent to spend the summer with his grandfather in Buttonville.  There is nothing there, and yet, somehow Ben manages to find an unimaginable adventure.  It begins just as he arrives in town. He sees something incredible in the clouds, but when he tries to talk about it, he’s called a “storyteller.”  Ben knows what he’s just seen and he knows the girl in the window has seen it too.  Tomorrow, they’ll meet and figure out what is going on.

If you need more convincing, click on this link to watch The Sasquatch Escape trailer.  Pearl and Ben will take you on a funny, exciting and complicated journey as they become apprentices to Dr. Woo and learn to care for real “imaginary” creatures. 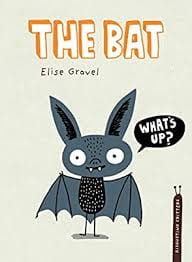 Here’s what is says on the back of The Bat:  “As a child, Elise Gravel was already fascinated by disgusting little creatures.  At three-and-a-half, she founded the Organization for the Defense of Disgusting Critters, of which she was both the president and the only member.  Nowadays, when she’s not busy petting a fly or a worm, she writes and illustrates strange children’s books.”

I don’t think they’re strange at all.  I think they are interesting and funny.  They’re certainly favorites in the classroom!  They make you think differently, question and wonder.  Make sure to read the new books in the series:  The Bat, The Cockroach and The Mosquito.  What disgusting creatures would you add to the series? 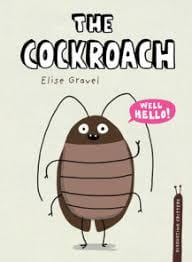 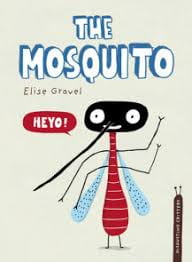 What are you reading?  What do you recommend?  Let us know, but leaving a comment below.📘