I’ve been unpacking and cleaning, arranging and planning.  Our classroom is mostly ready. Now it just needs you – the students of 3E to bring it to life.  Here’s a view of our room from the door and from the corner by the sink.  We’ve got a lot of space to jazz up and fill with amazing art, exciting experiments and wonderful words – all yours! 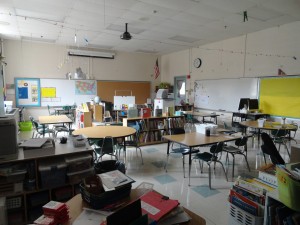 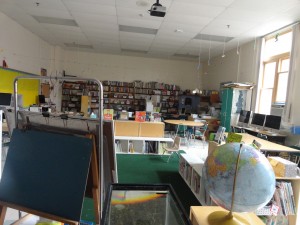 The books are waiting to be read.  We’ve got fish and hermit crabs to care for and lots of things to observe and wonder about, question and create.  In the words of Kid President – “what are you going to teach the world?” 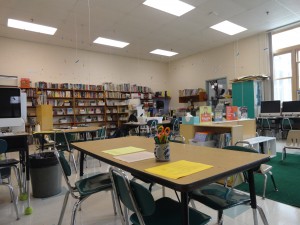 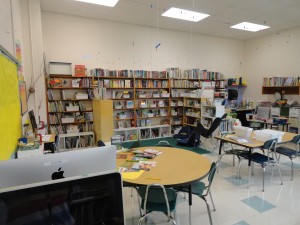 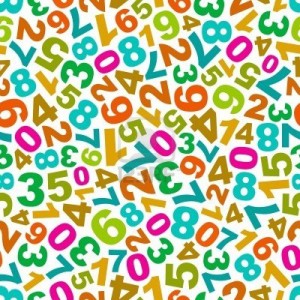 The dogs were fed 1/2 cup of food twice a day.  How many cups of food would they eat in a week?

The cats were given 1 can of food a day.  How many cans of food with they eat in a week?

Yikes!  Sorry about Friday and Monday – family fun sort of got in the way.  I have been reading (I’ll put some recommendations on our sidebar bookshelf)  and canoeing. (Did you know you can get pretty close to a heron if you’re quiet? Cool!)  I hope your summer is great.  Enjoy!

There are seven perches on my birdfeeder. A purple finch sits on each perch. Each bird eats four seeds a minute. How many seeds will the finches in altogether in five minutes?

There were three pairs of cardinals nesting around our yard. Each pair laid four eggs. The babies are fledged and have left the nest. How many cardinals (parents and fledglings together) are in our yard?

Nick started reading The Hobbit.  He was on page 86.  The book has 372 pages altogether.  How many more pages does he have to read before he is done? 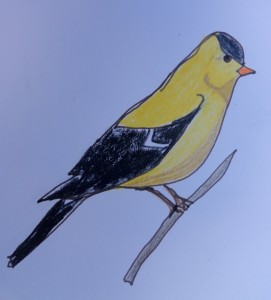 This summer I thought I’d try to write, read a book, and draw a little picture everyday.  I love art, but I don’t feel super confident about what I can do.  I take a long time to sketch because I try to make it perfect; except there is no such thing… so all I really end up doing is using a lot of time.  I thought practice more.   The 3E motto: Practice Makes Progress popped into my head.  My daily drawing goals were to practice contour drawing – to speed myself up a bit – and to try to find a way to put light into my pictures to make them more 3-D.

Here’s some of the drawings I’ve done so far.  After working in a little sketch book for a while I thought of putting them in my calendar.  The first two days were fine, but the third one – the second hummingbird – made me feel like quitting.  I thought about getting a new calendar and throwing this one out.  (“Silly!  That’s what learning is – making mistakes.  My class knows that.  I should too.”) and about covering it up with white stickers.  Finally my 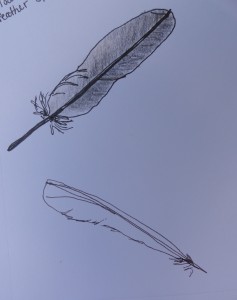 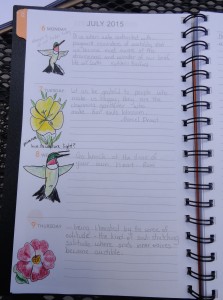 Do you have a summer goal?  Maybe you’re practicing to so you can swim out to the deep dock.  Do you have a surfing goal?  Maybe you’re trying to write poems, a story or a series even.  Are you trying something at camp?  Maybe you hope to grow vegetables to enter in a fair.  Maybe you’ll invent a new cupcake recipe.  If you’re working toward something, make a post, or leave a comment and tell us how it’s going.  Summer is a fun time to give different things a try.  Hope to hear from you! 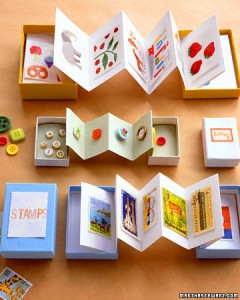 Collection In A Box  found on marthastewart.com

I liked this idea when I saw it but realized that I didn’t have a collection that would fit inside a box like that.  They were too big or fragile or bulky so I began to think.  Inspired by Lily’s wonderful Christmas gift I decided I would combine these ideas to make Poetry Presents.  Follow the same directions up above, but instead of adding a collection, write a poem.  It could be an original poem or an old favorite that you want to illustrate.  Have fun creating and writing. 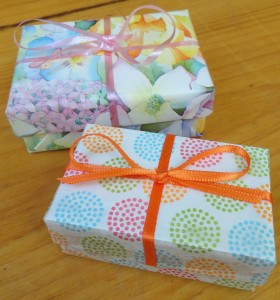 Jordan bought some bottles of juice.  Each bottle costs $2.  How much money will Jordan spend if he buys three bottles?  Jordan paid for the juice with a $20 dollar bill.  How much change will he get in return? 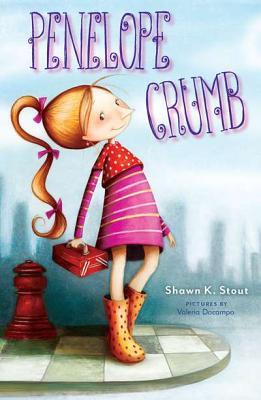 It all started in Miss Stunkel’s art class.  Penelope drew a portrait of her best friend, Patsy, and Patsy drew one of her.  Penelope studied Patsy closely using all the skill of Leonardo da Vinci to create the perfect image – the Mona Lisa of 4th grade portraits. At last it was time to share and Patsy jumped up first to present her portrait of Penelope.  She proudly shared.  Penelope was stunned.  She knew she had a different nose, but was it seen like “that?”  Her nose wasn’t long and huge and pointy – COLOSSAL.  Large maybe, and yet, distinguished certainly.   The picture stared at her from the bulletin board and Penelope knew she had to do something about it to make it right.

At home that night Penelope asked her mom about her nose, only to discover that her nose was a Crumb family trait.  Evidently she and her grandfather shared the same nose, but Penelope never knew that because she had never met her grandfather.  She thought he was graveyard dead, like her dad, but he’s not.  In fact, he might live nearby. Assigned to “discover what you don’t know about your family” and then make a family “coat-of-arms using pictures and drawings to show your family’s history” Penelope decides to find her unknown grandfather and discover how her nose connects them.

Penelope, with the help of her home schooled, over-protected neighbor Littie Maple does some pretty courageous, dangerous and ingenious sleuthing to fix her nose, discover the unknown, and heal and strengthen her family.  I’m glad Penelope Crumb is the first in a series, because Penelope is fun to be around.  She is determined and has just the right amount of quirkiness to make her a person I’d like to have in my life.  She’d help me notice and appreciate the little things that make each of us uniquely important in the world.

Juliana bought two packages of crayons for $.59 and one package of pencils for $.45.  How much money did Juliana spend?  She handed the cashier $5.00.  How much change did she get back? 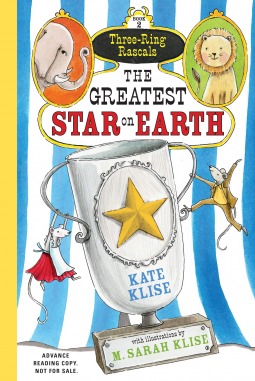 The Greatest Star on Earth – book 2 of Three-Ring Rascals written by Kate Klise and illustrated by M. Sarah Klise

of interest to 2nd through 5th grade readers

Sir Sidney has the best circus in the world.  It puts everyone in a good mood – no matter how bad your day has begun!  On top of that, Sir Sidney is the nicest man alive.  He greets everyone who comes to his circus personally and children are always allowed in for free.  He also makes time for his performers.  Though he has seen Stan and Dan, the Flying Banana Brothers perform their tricks every day for years, he still stands and cheers when he watches them.  He always applauds Leo the lion’s song and he still gasps with delight when he sees Elsa the elephant dance.  It is true: Sir Sidney’s Circus  Animals, Acrobats, Amazing Feats  Every show is guaranteed to tickle your funny bone and put a smile on your face.  It does.  It always does – well except for that time when Sir Sidney hired Barnabas Brambles to help. According to Bert and Gert, the circus mice, “Let’s just say it was a disaster.”  “It was.  That’s a fact.”  You can read about that here.

Sir Sidney says, “But here’s another fact.  Everyone deserves a second chance.  We can help Mr. Brambles become a better man.  Traveling with a circus is a wonderful way to learn.”  After he post the weekly schedule of performances, Sir Sidney gets a letter from Polly Pumpkinseed  – publisher of The Circus Times.  She is trying to drum up business for her magazine and has decided now that Sir Sidney has the best circus in the world there must be a contest to find out who the best performer is.  He or she will be named Greatest Star on Earth and win a trophy.  Polly Pumpkinseed plans to attend one of the shows in disguise to select the winner.  Sir Sidney is distraught.  All of his performers are excellent – but only one trophy means only one can be selected.  Soon Sir Sidney collapses and Dr. Dora Drap discovers he has a “worry wart” growing on his nose and spreading across his face fast.  He must go the hospital immediately.  So it looks like Barnabas Brambles is going to get that second chance.

You’ll have to read The Greatest Star on Earth to find out what happens when Sir Sidney can’t be cured, Barnabas slips back into his old ways and there is only one trophy for one performer to win.

As always the Klise sisters’ books are full of humor and designed to enjoy.  You can read about them and explore their writing and art here.  Sarah’s Top 7 Drawing and Writing Tips made me think of Lily and Katie’s pieces in our magazine.  Enjoy!  Let us know what you’re reading and what you’d recommend in a comment.