I’ve been thinking about characters a lot this week ~ how to authors create characters we love?  How did Betty Birney think of Humphrey and Og – what inspired her to give them the traits we love?  How Ben Guterson think of Winterhouse with Norbridge Falls, Elizabeth Somers, Leona Springer and Freddy Knox – lovers all of words, puzzles, magic and wonder?

Here is a collection of quick write ideas that might inspire you to create fabulous characters.  If something tickles your brain, it would be lots of fun to read your writing in a comment, or on your blog.

You find a time machine.  Where would you go and why?

Imagine you are a big majesty lion living in a zoo.  How do you feel being surround by people all the time?  What do you do because of those feelings?

What is a typical day for a mermaid?  What happens one day that is extraordinary?

What would you do if you have a triceratops for a pet?  How did you get it?  How will you keep it?

Your cat gets stuck on the roof.  Why?  How will you get him down?

A kid (it could be you ~ or not) gets to be invisible for one day.  Tell the story of what happens – good or bad.

What would you and your pet talk about, if they could talk?

Other ~ what’s a topic you’d enjoy writing about?

I’ve been exploring Nature Journals and Nature Journaling as a way of slowing down, focusing and taking the time to notice and record all I see.  I came across some resources here.  There are lessons and examples – it is written for adults, but if you scroll through the document you’ll see some amazing journal entries created by kids just like you.  Here are a few of the examples they share: 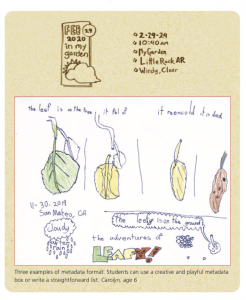 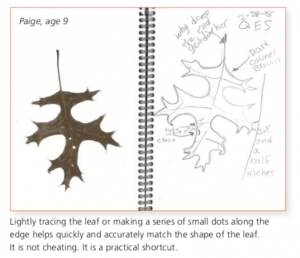 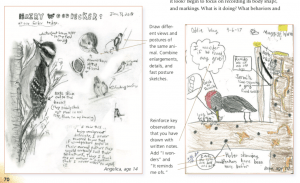 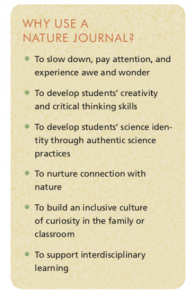 I’d love to create a notebook like these.  I’m going to set aside once a week to make an observation in my yard.  From what I see, I will create a journal page sharing what catches my eye.  Maybe as I get better with this practice, I’ll add more times into my week.

Here are some quick write prompts to inspire your journaling.

Maybe you can take a photograph of your journal and add it too your blog when you’ve got the time. 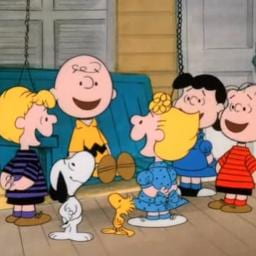 I’ve been thinking a lot about happiness lately.  When I was your age, Charlie Brown and Snoopy were pretty popular.  Charlie Brown specials were real treats on TV and I loved to watch them all. “Happiness,” from You’re a Good Man, Charlie Brown! is a song from one of those specials.   I learned it at camp during the summer at the end of 3rd grade.  I still remember it – it hums through my head every once in a while.  You can watch and listen to it here.  It ends with the line in the blue poster ~ my favorite.🙂 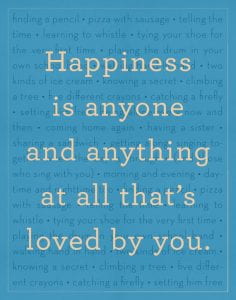 So, let’s find ways to celebrate HAPPINESS this week.

If you were to write a song about happiness, what would you include?

Where does happiness come from?

How can you bring happiness to your family and friends?

How are happiness and gratitude alike?  How are they different?

What can you learn from celebrating happiness each day?

Write a poem about the way smiles look.

What happens when you feel happy?

Write a letter of thanks to someone who makes you happy.

Write about whatever comes to mind ~ whatever makes you happy.😎

Would you like to have an adventure like Harry Potter, Anakin Skywalker or Jack and Annie?  Would you like your adventure to be big or small, dangerous or funny, extraordinary or everyday?  Check out these quick write prompts.  I hope you’ll be inspired to write an adventure story of your very own.  Maybe you’ll be the starring character…  Pick up your pencil, or go to your keyboard and have some fun!

Imagine that you can fly.  Where would you go?  What would you do?

Imagine being in a forest where the trees can talk.  Why can they talk?  What are the conversations they have with you while you’re among them?

What is your favorite sports team? What if you were on that team?  What would you do?  Share the events of your epic season.

Write a story about what goes on in the refrigerator when the door is closed.

Imagine that you are small enough to ride an ant or a bluebird or a chipmunk.  What adventures would you and your animal friend have?

Other – write about any topic ~ adventure or otherwise ~ that comes to mind.  Have fun using your imagination!

🗽Do you know why we celebrate the 4th of July?  🇺🇸Have you thought about what Independence Day means?

Here are some writing prompts in blue and some holiday fun facts 🎇 adapted from Journal Buddies in red,  with a few different ideas added in.  ✏️Have fun writing today and everyday.  🏜Share your ideas and thinking on your blog or in the comments below.🏕

What does the Fourth of July mean to you?

Fourth of July Fun Fact – Food is a huge part of the Fourth of July—and people eat approximately 150 million hot dogs across the country on this day alone.  What a tasty way to celebrate our freedom!

Which type of food do you most look forward to eating on the Fourth of July?  Which feeds are an important part of your family’s traditions and why?

There are many myths and legends about how the Liberty Bell got its famed crack.  Write a short fictional story in which you make up your own funny reason for the damage to this iconic American landmark.

Write a story using these words (and others too 😎): picnic, parade, watermelon, splash, race, cousins, bicycle, dog, and fireworks.

Dear Pen Pal… Write a letter to an imaginary friend who lives in another country.  Explain why we celebrate (you might have to do a little research here and here) and describe five things you like about living in the United States of America.

Fourth of July Fun Fact – Paul Revere and Samuel Adams buried a time capsule on the 20th anniversary of the 4th of July in 1795.  The time capsule was finally opened almost 220 years later in 2014.  It included newspapers from the day, a silver plate, old coins, and a copper medal that featured an engraved picture of President George Washington.

If you were going to bury a time capsule today to reflect the state of our nation, what would you put in it?  When would you want it to be opened—and how do you think people would react to its contents?  Be sure to explain why you would include each of the items you chose!

Do you believe freedom truly exists in the United States of America?  Why or why not?

I was thinking about what it means to feel confident.  When I’m feeling confident, I’m usually happy and better able to help others.  I think helping and happiness, caring and kindness can lead to empathy and understanding.  That is important to me.

I went in search of some writing prompts that might help us explore those ideas.  Here are a few that spoke to me ~ but I’ve included the whole list.  I’d love to read what you write.  😎💗🌱💐📝

What does it mean to have confidence?  How do you think confidence relates to happiness?

Make a list of ten things you’re good at doing.  How do these things make you unique?

What is your greatest talent?  How do you share it with others?

Write down five things that define who you are, listing them as “I am ____” statements.  Take a few minutes to think about each one.  Which quality feels best?

Write about a person you admire.  What qualities do you have in common with this person?

Write a poem that describes the feeling of confidence.

Have a great time writing.  Share your ideas with the world!✏️

Tomorrow is the first day of summer!  Here are some summer inspired prompts.  Have fun writing.  Maybe you’ll even share it on your blog.

Describe your idea summer day from start to finish.  Use as much detail as you can.

Would you rather go swimming in the ocean, in a lake or in a pool?  Why?  Tell your favorite swimming story.

Write a poem describing the way summer makes you feel.

What your favorite summer treat?  What makes is so delicious?

Other ~ write about something that interest you right now.

Father’s Day is coming next weekend!  Let’s celebrate DADS with these quick writes.

Make sure to thank your dad for all he does and make sure he knows how special he is to you!

I wonder if you’re feeling both blue and excited like I am.  I’m blue that summer is coming to an end and I’m blue that 3E is changing.  I’m excited for school to be starting again and I’m wondering how our new year will unfold.  We’ve still got a little bit of summer left, so let’s celebrate.

How will you spend your last week of summer?

What will you do to make the final days of summer special?

Write a poem about summer coming to an end.

Think back on your summer and write about something you did that you’re proud of.  What makes this accomplishment feel special?  Do you think it is something you could have achieved during the school year?

Make a list of all the things you did this summer.  Can you come up with something for every letter of the alphabet?

Have fun writing!  I can’t wait to see you – but enjoy the last bits of your summer to the fullest!

Read through the prompts, think about them for a bit and when you’re ready, find ten quiet minutes and begin writing

Use the prompts, or write about whatever idea comes to your mind.  It’s okay if you finish one idea and begin another.  It’s also okay if you don’t finish when the time is up.  Just like always,  you decide:  stop, or keep writing.   You may want to post your quick write as a comment, or on your own blog or you may what to keep it in your notebook.  This week’s writing suggestions come from the Journal Buddies Newsletter, “Happiness Happens.”

How do you feel when you witness (see) happiness?

Where does happiness come from?

Write a poem about the sound of happiness.

How can you encourage happiness?

What things make you the happiest?

What can you accomplish when you’re happy?

What does it mean to find the silver lining in a situation?

I hope you have a happy time writing. Enjoy!