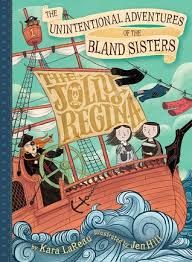 Thanks to Rachael and her mom we have the first book in a new series called The Unintentional Adventures of the Bland Sisters, The Jolly Regina by Kara LaRue.  Kale and Jaundice Bland are twins.  Their parents left for an errand several years ago and the girls are still waiting for them to return.  While waiting they follow the same routine each day.  Here’s how it goes:

“Jaundice and Kale pride themselves on their exacting routine.  After breakfast (plain oatmeal with skim milk, a cup of weak tea on the side) they tend to their business of darning other people’s socks, which takes the better part of the day.  Each allows herself one ten-minute break, during which she eats a cheese sandwich on day-old bread and drinks a glass of flat soda while gazing out the window, watching the grass grow.”

Their normal evening entertainment was reading to each other from the dictionary.  But then came the knock on the door.  What followed was a surprise or rather a predicament.  The girls were taken (in a burlap bag that caused chaffing) to the Jolly Regina to become deck swabs for Deadeye Delilah.  Being part of a pirate crew is quite a change for the Bland sisters.  It’s hard work and pirates are not always all that nice.  You’ll have to read the book to find out how Kale and Jaundice escape their predicament.  Will they develop a taste for adventure, or will their longing for quiet routine take over?  These “bland” characters will make you smile. 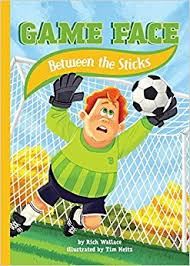 If you’re into sports you’ll like Between the Stick by Rich Wallace.  Griffin likes playing soccer for his local rec. league.  He plays defense and he’s good at it. In fact, this season his team is undefeated.  The team works hard and plays hard, but they have fun too.  That is, until the goalie sprains his wrist and is out for the rest of the season.  Now it’s up to Griffin to take his place in goal.  It’s hard work and a lot of pressure.  What seemed like a maybe championship season for Griffin, isn’t as easy as all that anymore.

Griffin and his teammates are into winning.  But when things don’t go their way, they handle it with style.  It’s exciting to find out how the season goes in this soccer story of the Game Face series.