Today we are challenging ourselves to post something new on each of our blogs.  We hope you’ll check them out and leave a comment or two.  We do love knowing our posts have been read.

This was doubly challenging today because the student server wasn’t working very well.  It was really hard to log in.  In fact, that took up half of our blogging time.

If you don’t find a new post when you look today, please check back again.  The class is excited to tell you about recent dance competitions, County Cup hockey tournaments, playing new games, getting new pets, visiting friends and having birthday parties. 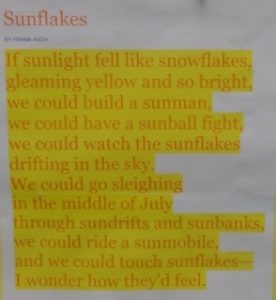 For the last few weeks we’ve been reading the poem, Sunflakes by Frank Asch.  We’ve had fun imagining what the words would look like if they became true.  We are wishing these would be the kind of flakes that fall (if any do) from now on – we are ready for Spring. 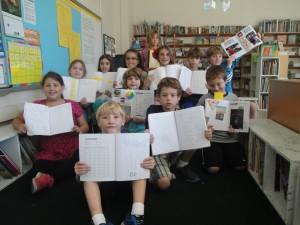 by Parker, Katie and Cameron

We have been working on true stories called personal narratives and fiction stories. We have a chart that tells us what we need in our stories.

Everyone is working their best to make it interesting to show people how exciting it was. Parker has been working on a story called “Foobo.” Foobo is an orange bunny and he goes on a lot of adventures. “When I got Skylanders” is Parker’s true story. “When I got Skylanders I was so happy.” (Parker) Cameron has been working on “I Went Camping.”  “It’s a true story about when my friend came over and we all went camping.” (Cameron) Katie has been working on her own Piggie and Gerald story.  It’s about when Piggie invites Gerald to go with Katie to soccer. Her personal narrative is one about getting her two dogs. 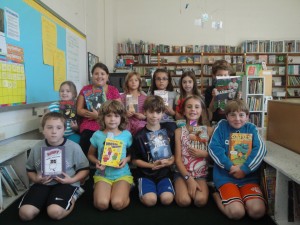 by Jordan, Arjay and Lily

Right now our class is reading the Emily Wiggins series by Phyllis Reynolds Naylor. We just finished Emily’s Fortune (#1) and now we’re onto Emily & Jackson Hiding Out (#2).  This is a great series.  Our class really recommends it.  Readers that like mischief would enjoy these books.

Emily is a quiet girl whose parents have died. She has a pet turtle named Rufus. Her Uncle Victor is trying to capture her for a reward of 10 million dollars. Emily is trying to escape her Uncle Victor and reach her Aunt Hilda’s house. Our class is writing and drawing in small booklets so we can remember what is going on in the story. We are really excited to start the second book today.

We’re doing lots of reading! We have independent reading time in our classroom after snack time. We each choose a quiet place that we can do our reading and we get our book boxes that we keep our books in. We do independent reading for between 30 and 45 minutes each day. 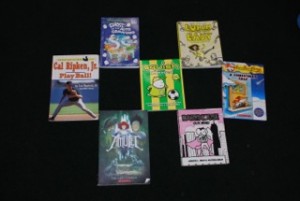 Here are some book series we recommend:

At the end of reading time we write down what books we read that day. 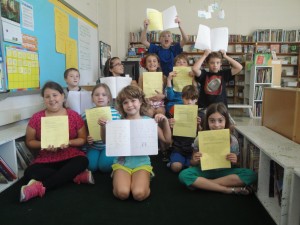 By Liam, Hajna and Juliana

We will be making word problems using our numbers of the week today. 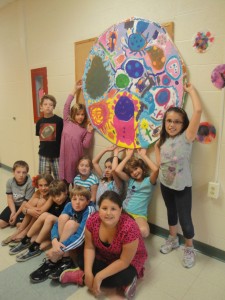 by Connor, Gabriela and Kaylee

What is the Dot Gallery?

Why is the gallery in our hall?

–       Because it was international dot day

What can you notice if you look at the gallery?

-There are different types of dots

-There are paper dots and dyed dots

-There are sequined dots

-There are stick-on dots

-It is very colorful

-Some people did swirls

-There are drawings inside of some of the dots

-There are more picture frame pieces than dyed dots

-There are 14 framed dots

-There is a giant dot

-The giant dot has a lot of other dots on it

facts and comments by all the students of 3E

Arizona’s state capital is the largest capital in the U.S.A.  When you look at my float I hope you notice how hard I worked.  Presenting my float was awesome.

Disney is an interesting place.  It is the most visited theme park in the world.  Ponce deLeon discovered Florida.  I hope you like my float.

The Arches in Arches National Park are over 1,000 years old.  On my float are the La Sal Mountains, arches, and a lizard and big horn sheep.  I felt very happy when I finished because I know I had accomplished something great.

Arkansas has the only diamond mind in North America and the two largest diamonds from North America came from Arkansas.  On my float I had all seven wonders and I added all of the state symbols like the state bird, flower, insect, flower, tree and animal.  I got to learn about all of the states and I love to learn new things.  I learned a fact or two about each one.

When you hear the word Nebraska you might things farms, but only 7% of Nebraskans have farms now.  More that one fifth of the state is meadow and grassland.  When you see my float, you’ll notice I worked hard and didn’t rush.

South Dakota is a cool state.  I showed all the wonders on my float.  Everything went really well – the parade was great.

Vermont got it’s nickname from the Green Mountains there.  I hope you notice the letters that spell Vermont on my float and how I made them.

One of the facts I thought was most interesting what how popular donkeys are in the Grand Canyon.  I was amazed that there were so many different types of rocks there and even mountains in the canyon.  My biggest accomplishment was making it through the whole parade without dropping the back board.

The parade was fun because we got to drive our floats.  I had the picture of Tennessee on mine.  I got cake from Maryland.

After the parade I felt proud of myself.  I had accomplished something.  Texas is the second biggest state.  Only Alaska is bigger.  I wanted people to notice the prairie dogs the most on my float.

I like the concert.  I think we did a very good job.  I was nervous.  I imagined the audience in their underpants.  I wanted people to notice the Jello I used for the Delaware River.

In Georgia they have a place where people live ilk the pioneers did.  You can give it a try.  Martin Luther King, Jr. was born in Georgia so I put his picture on a balloon.  I like that I was able to answer all the questions about the float, state and the wonders I chose.

Wisconsin is a cheese producing state.  Some Wisconsin cheese is aged for five years.  It is a place without a lot of homesteaders.  There is a mineral museum because there are a lot of minerals.  I had the Arrow of Light, Faith and Hope on my float.  I figured out that I wouldn’t wear a hat under my float.

An interesting fact about Yellowstone National Park is that Delaware and Rhode Island can fit inside the park itself.  The thing that drew attention to my float was Smokey the Bear.  Many people liked my float at the parade.  I felt good about that.

North Dakota’s capital is Bismark  I liked when everyone was singing and laughing.  I spent time on my float.

I learned the Maryland crab cakes are the best.  I had the Smith Island Cake on my float and everyone got to eat the cake.

I never knew there were more than 6,0oo,0oo people in Indiana.  I worked hard on my float.  I was not as nervous as I thought I would be.

The Everglades used to be hunted.  Not any more.  People noticed that I put effort into my float because the crowd ROARED like crazy when I entered with my float.  My greatest accomplishments were not making any squeaky noises at the recorder concert and making the crowd ROAR like I said before.

The seagull is the state bird of Utah because they saved the crops from the locusts.  I worked very hard on my float.  The parade was very fun and everyone did a great job. It starts out when Sabrina went into a portal to find her kidnapped parents. But then next to her she sees a young girl in a red hood heading one of the most vicious dragons, the Jabberwocky.  Sabrina then tries to save her parents, but it doesn’t work.  She gets help from an uncle, she never knew she had, and Daphne.  Sabrina and Daphne learn that the one thing to kill the Jabberwocky is hidden in three places.  Can they find them before Jabberwocky and the girl rampage through their town, Ferryport Landing? Read it and find out. review by Ella B.

Bug Juice on a Burger is about  a girl named Eleanor.  And she gets a piece of mail from her grandmother saying your invited to go to Wallapuck Camp for the summer. At first she did not  want to leave her parents for camp, but then she saw her camp buddy, Julian and she felt a little bit better.  During the camp  she gets sort of mad because she doesn’t like  the camp swim class, the food or the way things go. Also, she doesn’t like how much she misses her parents . Eleanor writes to her parents while she is at the camp. Her parents miss her too but while she writes it she starts to fell a little better.  She becomes friend with  Julian.  Julian had been at the camp more than 3 years. Julian helps Eleanor  while they’re at camp. Eleanor’s mom also went to that camp when she was little.  When Eleanor comes home from the camp she wants to go back.  She also gets a big present  – a puppy .  And that’s something she  always always wanted . This is not a ordinary comic.  It contains lots of fun adventures for a boy named Jimmy.  It is your choice about how the story goes.  Follow all the lines so you and Jimmy have a great time.  Try to guess what will happen, what his feelings are, or what he should have done.  In this book you create the story.  Find out what happened in the rest of the story.  How will you create it?  Do it in Meanwhile where great adventures begin. Life for Callum is just dull, until he meets Iona Mcnair fishing with her hands in his family’s stream. He makes a deal with her, she can fish whenever she wants in the  stream, but she must show him a secret on his farm.  Callum thinks he knows everything about his farm but when he discovers the osprey nest there his life changes. He must keep it a secret and not tell anyone, not even his best friends Rob and Euan. But when Iona tells him the Osprey might be dead he must act.  The osprey’s life goes from good, to difficult, to dangerous, and so does Callums!! Find out why  in WILD WINGS.  Hope you choose to read it.