This week, because we’ve been reflecting on who we are as learners we’ve been sharing a few books each day that feature characters who are able to reach their goals in a variety of ways.  We’ve explored several different models of multiplication this week and we’ve learned some elaboration strategies for adding detail to our writing. We hope this will make our writing even more interesting. 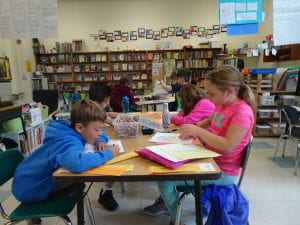 This week the children completed their multiple intelligence graphs and described what they know about themselves are learners and doers.  They spent time thinking about how they might like to grow as readers. They selected books that seem “just right” at this point in the year and described them.  Then they set a goal for how they would like to grow as a reader and made a plan for what they might do to meet that goal.  Many of them would like to be able to read a whole series, others would like to be able to read and understand more complex chapter books, and still others would like to learn how to figure out how to read new words. They also spent some time exploring different trait of writing:  ideas, organization, sentence fluency, word choice, voice and conventions.  The children chose pieces of writing they feel best show their writing abilities.  They described why they chose these pieces and used them as a basis for setting a next step goal.  Some of them would like to be neater, others would like to spell better, and still others would like to make their audience laugh.  Third graders have a unique sense of humor.  Be prepared – a few of them can write with humor and still develop a story, most 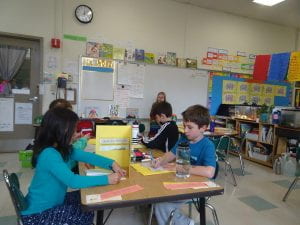 cannot. Finally the children looked at several of their math problems from the past month and described the strategies they are comfortable using now.  Looking forward at things we’ll learn more about this year, they set goals for what they hope to be able to do as a mathematician by the end of third grade.

The children have been thoughtful and self-reflective.  This is a real challenge for 8 and 9 year olds.  They are developmentally just becoming able to look beyond the concrete aspects of their work and consider the work habits they can apply to be even more successful.  You’ll see this when they share with you next week. 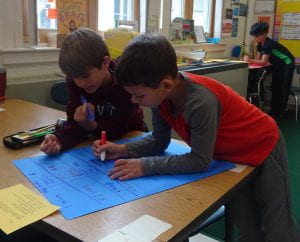 We have begun to explore different ways to develop ideas.  We know that all sentences have a doer (a noun) doing something (a verb) along with a capital letter at the start and punctuation at the end.  We’ve practiced writing simple sentences.  Now we are learning how to add details to our sentences by adding adjectives, and phrases that include information about when, where, how and why.    We’ve worked together to expand some simple sentences to understand how the information we add helps bring deeper meaning to our writing.  They children have had the chance to practice on their own as well. Some of them are beginning to use these strategies on their own.  It is fun to see how they are thoughtfully adding details as they write that helps develop their plots and they characters.