I know, it’s Tuesday today.  I am losing track of days – but I guess that is what summer is about.  I’ve spent lots of time with my family and Maggie.  We’ve been walking everywhere and I’ve been collecting lots of feathers on those walks. 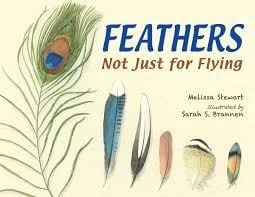 Some of the feathers are flight feathers, fallen from wings and tails.  Others are smaller feathers from breasts and bellies.  I think they are beautiful. Some are speckled and some are striped.  Some are iridescent and others appear to be different colors depending on the angle you see it from.  Most have white shafts, but some shafts are tan or even bright yellow.  Even the black feathers, that I’m guessing have been molted by crows, shimmer  midnight blue in the sunlight.  Melissa Stewart’s book Feathers: Not Just for Flying tells of how different feathers serve birds in different ways.  The book blurb says:

It is interesting to think of all the things feathers do.  Birds have made some many different adaptations that allow them to survive in so many different environments and habitats. 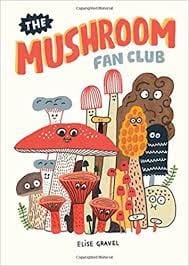 Another thing I’ve been noticing on my walks with Maggie are the mushrooms.  They are everywhere in the woods and along the dirt roads where we walk.  Elise Gravel has written a new book about hunting for and gathering mushrooms with her two daughters.  It’s called The Mushroom Fan Club.  In it you can begin to learn about how and where mushrooms grow.  Scientists who study mushrooms are called mycologists.  The author teaches us about a few different kinds of mushrooms – some that are edible and some that are poisonous – and 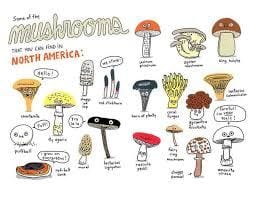 ends with a collections of mushroom facts.  She writes: “In case I still haven’t convinced you that mushrooms are cool… There are about thirty species of mushrooms that glow in the dark!  The super mushroom from Mario is a poisonous fly agaric.  Mushrooms grow better where lightning has recently struck…”  Mushrooms are pretty interesting and the more you know about them, the more interesting they become.